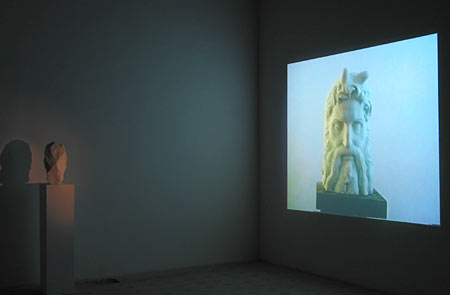 The idea came from a familiar saying attributed to Michelangelo: "the sculpture is inside the stone, only the surplus needs to be taken away". I wanted to reverse the sentence: the stone is inside the sculpture. It means more or less the same thing - not a lot. I carved back the cast stone copy of the Moses head into what was seemingly natural rock, whilst documenting practically every single blow. The film is played in reverse, and thus the stone grows instead of shrinking, and due to the small movements caused by the process of carving the stone looks more like a living organism than dead material. My intention was to unify the video and the object as a vehicle for the content, each component bearing an equal amount of information: the sculpture by itself doesn't betray its "origin", and the video on its own is no more than an animation film.